From Camera-wiki.org
(Redirected from Topcon)
Jump to: navigation, search

Foundation as an optical company

The company was founded in 1932 as Tōkyō Kōgaku Kikai K.K. (東京光学機械㈱, usually translated as Tokyo Optical Company, Ltd). It resulted from the merger on 1 September 1932 of the measure instruments section of Seikōsha (the manufacturing branch of Hattori Tokei-ten) and Katsuma Kōgaku Kikai Seisakusho (勝間光学機械製作所), said to be a subcontractor or a dependent company.[1] As its name indicates, it was based in Tokyo.[2] It remained dependent of Hattori Tokei-ten until 1947.[3]

It was first an optical company, like Nippon Kōgaku (later Nikon). It was a supplier to the Imperial Japanese Army whereas Nippon Kōgaku was a supplier to the Navy.[4] The first lens was the State (ステート) triplet, made available in 1933.[5] It was followed in 1934[6] by the Toko (トーコー) triplet and in 1935[7] by the Simlar (シムラー) four-element lens. The name Toko certainly stands for Tokyo Kogaku, and it is said that the name Simlar (written shimurā in Japanese) comes from Shimura, the quarter where the company plant is located.[8] The company also made special purpose lenses, many of them for military use until 1945. It began producing 39mm screw lenses immediately after the war, notable mounted on the Leotax cameras.

The company's first camera was the Lord, released in 1937, which was not a big success. It was followed in 1938 by the Minion 4×5cm folders. The company began the production of 35mm cameras in 1948 with the Minion 35 and of 6×6 TLR cameras in 1950 with the Topcoflex, mainly distributed as the Primoflex and Laurelflex. It was the first appearance of the "Topco" name, probably from Tokyo Optical Company. The Topcon brand name appeared in 1953 on the Topcon 35, successor of the Minion 35 series, and the Topcor lens name appeared in 1954, soon replacing all the previous lens names. (Topcon and Topcor were obviously modelled after Nikon and Nikkor.)

In 1953 and 1954, the dependent company Yamagata Kikai made the Semi Oscon that was advertised together with the company's own cameras.

The company began the production of Topcon 35mm SLRs in 1957 (before either Nikon or Canon produced an SLR), and it very soon concentrated on these, stopping the production of all the other types. The Topcon RE Super, launched in 1963 at the Photokina, was the company's most innovative camera and one of its most rugged and versatile. It was the first SLR with a through-the-lens exposure meter. Pentax would follow the next year with the Spotmatic, and Nikon only in 1965 with the Nikkormat FT, and with the Photomic T prism for the Nikon F.

In parallel to the high end bodies, Tōkyō Kōgaku also manufactured simpler SLRs, at the beginning with a central shutter, later with a Copal Square focal-plane shutter.

At the end of the 1960s, the company ceased to innovate on the SLRs, and produced variations on the same basic design until 1976. The bodies made after 1977 are not up to their predecessors, and the rumor says they were not designed by Tōkyō Kōgaku but elsewhere.

Tōkyō Kōgaku ended sales of 35mm cameras in December 1980, but production of the Horseman VH and VH-R 6x9 models continued, including the development of the Horseman ER-1 based on orders from Komamura. It thereafter concentrated on making specialist optical equipment of no direct relation to photography, and in 1989 took the name K.K. Topcon (㈱トプコン). It still (2007) exists.

Today the better Topcon models are eagerly collected in Japan. In 2003 Cosina designed and marketed an "Auto-Topcor" 58/1.4 lens (in Nikon F and M42 mounts) that externally resembles the genuine Tōkyō Kōgaku item and is even marked Tokyo Kogaku; it also created a variant of its M42-mount Bessaflex SLR whose distinctive pentaprism housing resembles that of the Topcon RE Super.

Topcoflex was registered as a trademark in the United States on 3 October 1953 by Tokyo Optical Company, Ltd, whose address at that time was 180 Hon-Hasunuma-Cho, Shimura Itabashi-ku, Tokyo, Japan.[9] Later, 1 November, 1957, the same trademark was registered in Canada.[10].

Topconette was registered in the United States on 21 December 1961. The company still listed the same address as on the 1953 filing at this time.[11]

Unirex was registered as a trademark in the US on 2 March, 1970. Even at this late date, the registration continues to show the name Tokyo Optical Company, Ltd. and the same address as previous filing.[12]

All of these take Exakta lenses.

The cameras with UV lens mount are a unique series which comprises both leaf shutter and focal plane shutter SLR bodies. All of these take Topcon UV lenses. 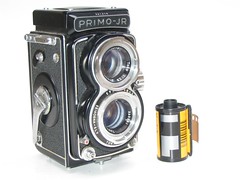 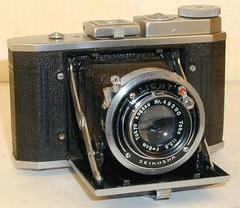 The Mascot subminiature was produced by Shimura on behalf of Tōkyō Kōgaku.

Fixed lenses on cameras from other makers

Not all examples of the cameras listed below have Tōkyō Kōgaku lenses. All the lenses below have three elements unless noted.

Unlike what is said by some sources, the Rotte Anastigmat lenses were not made by Tōkyō Kōgaku but by Tokiwa Kōgaku.[14] An original document attributes the Hit 7.5cm f/3.5 four-element lens of the Auto Semi First and First Reflex II to Tōkyō Kōgaku, but this is perhaps a mistake and the lens was perhaps made by Tokiwa Kōgaku as well.[15]