Nihon Seiki Kōgyō (presumably 日本精機工業) was a Japanese camera maker in the second half of the 1950s. The Nescon 35, Ranger 35, Micronta 35 and Soligor 45 family of viewfinder cameras is usually attributed to a company called "Nihon Seiki", because of the lens markings found on most of these cameras. Furthermore, at least one example of the Nescon 35 was recently sold together with an original box inscribed "Nihon Seiki Kogyo Co., Ltd."[1] All these cameras evolved from the Aruba 35 II, which is usually attributed to the company Koike Seiki.

A company called Nihon Seiki Kōgyō K.K. (日本精機工業㈱) exists today (2008) and makes mechanical parts. It was founded in 1950 in the city of Suwa, and only took its present name in 1958.[2] It is not known if it is the same as the camera maker. 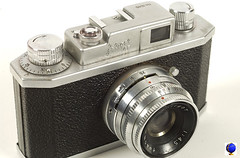 The attribution of the following is presumed only: